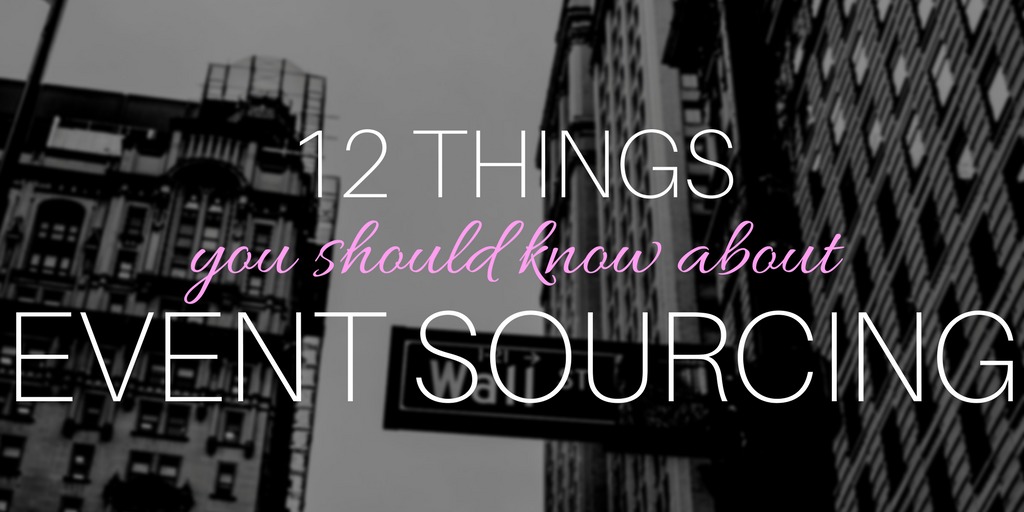 Are you aware that storing and updating current state means loosing important data?

Event sourcing is a way to solve this problem. It is the technique of storing state transitions rather than updating the current state itself.

Event sourcing has some more benefits:

When I first encountered the concept of event sourcing and CQRS and looked at some sample applications, I had the impression that it must be extremely difficult to implement. But later I found out that event sourcing is easier than I first thought, especially when it is expressed with functional programming.

Here are 12 things about event sourcing that should help you to get started today.

1. An event is something that has happened in the past

An event is a fact that happened in the past.

Events indicate that something within the domain has changed. They contain all the information that is needed to transform the state of the domain from one version to the next.

Events make the concept of side effects explicit. In an event sourced system, a state change is no longer an implicit result of performed operation. Instead the state change is explicitly defined and expressed in the domain language.

Here are some simplified example events for an accounting system:

Commands on the other hand have the intent of asking the system to perform an operation. Commands are represented in the imperative mood (e.g. CreateOnlineAccount) and can be rejected by the application.

2. An event should be presented as a verb in past tense

State transitions are an important part of the domain. Therefore they are explicitly recorded as events and should be named according to the ubiquitous language.

Because events are facts that have happened in the past, they should be presented as verbs in past tense.

3. State is a first level derivative of the event stream

Current state (e.g. the balance of a bank account) is the derivative of all the events that have happened up until now.

This means that an object is persisted as a stream of events. There is no need anymore to map its structural model with all its properties to tables in a relational database.

"There is not an impedance mismatch between events and the domain model." -- Greg Young

State is also often referred to as a projection of the event stream.

4. Every aggregate has its own event stream

An aggregate is a cluster of associated objects treated as a single unit. This could be e.g. an order and its line-items.

In the first example from above the aggregate is the bank account.

Every aggregate has its own event stream. Therefore every event must be stored together with an identifier for its aggregate. This ID is often called AggregateId, or StreamId.

5. The structure of an event and how to persist it

As just mentioned, an event must have an aggregate ID because we must be able to query events by their aggregate ID.

They also need either a timestamp or a sequence or version number. This is important because we have to be able to sort the event stream chronologically to be able to correctly replay the events.

The aggregate ID and the sort key do not necessarily have to be part of the domain event's data structure although they sure can be. I personally find it a little redundant to store the aggregate ID within every event payload. In the domain code the ID is always known within the context and can be passed explicitly if needed. But I guess it is the default for most implementations to be part of the event data.

We also need so store the event data itself. This is usually called Data or Payload and is done by serializing the domain event.

The minimum information to store per event is:

There is also some additional but optional information that can be stored if convenient or required by the business:

Note that the StreamId column should be indexed.

Additionally it can be useful to to track all the aggregates currently in the system, e.g. in a separate table.

A selection of suitable event storages are e.g. Event Store, Redis, or plain old relational databases. (I guess there are many more options that I haven't evaluated, yet.)

You can find more detailed information on event storage in the CQRS Documents by Greg Young under Building an Event Storage.

An event is a fact that happened in the past. So unless you've invented a time machine, it cannot be changed.

7. There is no delete

Just as events cannot be changed, they cannot be deleted either. A deletion is just another event, a compensating action sometimes called "reversal transaction".

Immutable events and streams have some benefits:

The apply function is the essence of event sourcing. It takes a state and an event and returns a new state:

Here is a code example:

Note that the apply function is pure. There must be no side effects when applying events to recreate the aggregate.

It is convenient to also return the version to be able to detect concurrency conflicts. Here is the code:

The decide function takes the current state and a command as inputs. It then decides whether the operation that the command requested can be performed at the current state by applying business rules. If so it will return one or more events:

Let's look at the code:

Note that validation of the command is also done in the decide function.

Commands will be rejected if:

Now we need to combine the replay operation, the decide function, and the event persistence to create a fully functional event sourcing application.

Here is how it works:

Now we can implement the integration code:

Then we inject the store into the handle function by partial application.

We create a query function that reads the event stream from the in-memory event store and replays the events.

Then we handle a few commands and print the results to the console:

12. When to apply event sourcing?

So this means that event sourcing can be applied to any application that is driven by the domain.

However, event sourcing comes with some costs regarding the implementation effort when every behavior is modelled explicitly. It also will be more expensive regarding the disk costs because it leads to larger amounts of data being stored.

It's a trade-off. We have to decide wether theses costs are worth the ROI for the business. There's more information on the trade-offs in Greg Young's CQRS document.

Generally speaking, I suggest to consider event sourcing when:

We have discussed the most important ideas of event sourcing.

While doing this we created a fully functional event sourcing application by applying these ideas in practice.

Even with the extra overhead of explicitly modelling all state transitions, the domain could be implemented in an uncluttered less then 90 lines single source file.

There are still a few open ends that we haven't covered:

While many of these aspects are non-trivial it is always a good idea to start out simple which is what I did in this post.

So if you are new to event sourcing, I hope this gives you a good starting point. Tell me how you are doing.

If you are an expert on event sourcing, and you have any comments or suggestions, please let me know.

The complete source code can be found on GitHub.

Manage Cookie Consent
To provide the best experiences, we use technologies like cookies to store and/or access device information. Consenting to these technologies will allow us to process data such as browsing behaviour or unique IDs on this site. Not consenting or withdrawing consent, may adversely affect certain features and functions.
Manage options Manage services Manage vendors Read more about these purposes
View preferences
{title} {title} {title}